It’s been about a decade in the making, but a 100-acre, mixed-use development project in Andover is about to get off the ground. 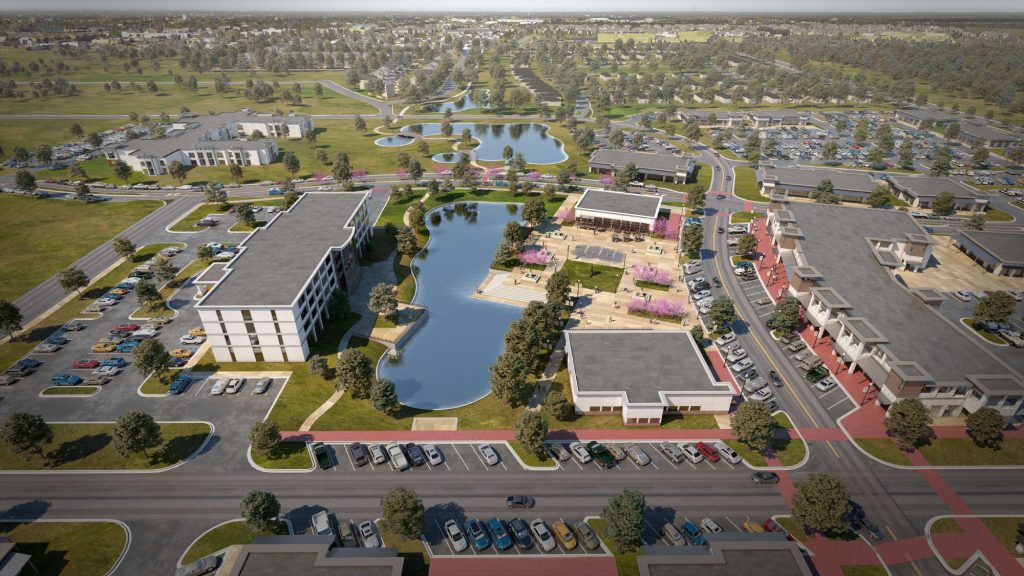 The Heritage will include two residential communities, six acres of community green space and about 340,000 square feet of commercial space with retail shops, restaurants and offices.

It’s been about a decade in the making, but a 100-acre, mixed-use development project in Andover is about to get off the ground.

The Heritage, which will stretch from Douglas Avenue south to Kellogg between Andover Road and the new Yorktown Parkway, will include two residential communities, six acres of community green space and about 340,000 square feet of commercial space with retail shops, restaurants and offices.

“We’re really excited that we’re at the point where we’re going to be breaking ground and building,” said Jerry Jones, whose Jones Commercial Development Co. is developing the project.

It was 2018 when Jones and investor Michael Lies, a retired dentist, first unveiled their grand vision for the site. But Lance Biel has been slowly accumulating property there since 2008. Biel, who is serving as business manager for the development team, said the land was identified early on by the city as future development for Andover.

Then it took several more years to work with Andover’s City Council to move forward with the construction of a four-lane divided road, Yorktown Parkway, that now runs north and south from Kellogg to Douglas on the east side of the property. Work is happening now on the second phase of that roadway that will extend up to Central Avenue.

The location, Lies said, is right in the heart of major sites in Andover.

City Hall and the 10,000-seat Capital Federal outdoor amphitheater is to the northeast. To the north is Andover Central High School and the new district tennis complex, stadium, district swimming facility and turf baseball and softball fields are all under construction. A Dillons and the Andover YMCA branch are to the south.

“We’re kind of in the middle,” Lies said. “We’re the uniter of what’s happening in that part of town so it’s really an advantageous location.”

Last summer the Council also approved the creation of a Tax Increment Financing district in the area to fund infrastructure improvements, such as road work, landscaping and public parks. Within the TIF district, the city will reimburse the improvements from an incremental increase in property taxes resulting from the development within the district’s boundaries.

Jones said construction will start this spring on the street systems that will connect all the major development pieces — about two dozen mixed-use properties that range from one to eight acres and dot the southern half of the master plan map.

The largest piece will be what Jones’s team is calling Heritage Square, a town square-type gathering place with a pond, plaza, green space and walking and biking trails. Jones said he envisions a hotel and family-friendly restaurants on the property, and a multi-story building with more commercial uses.

“It’s kind of like a main street with very walkable, very pedestrian-oriented street parking right at the front door of the shops and restaurants and cafes, and then the upper level could be office or apartments,” Jones said.

John T. Arnold Associates has started marketing the commercial properties. MKEC has been responsible for the planning and engineering of the site, and Gardner Design is a creative consultant on the project.

But the residential homes — about 189 sites — will be built first.

Perfection Builders will soon start building the two communities called Courtyards at The Heritage and Heritage Commons. Both are on the north side of the 100-acre site, with a linear park running between them.

“We should have people living out here before the end of the year,” Jones said.

The first commercial developments will probably open about a year from now, he said.

Lies said The Heritage will bring new growth to Andover, which has largely been considered a suburban community of Wichita.

“We found out that people would like to stay in Andover and enjoy the amenities of Andover without having to go into east Wichita or other areas,” Lies said. “They’re looking for a more of a community development, a downtown area with places to eat, cafes, coffee shops, and that’s what we’re trying to put together.”