People have been peering in the windows, calling the restaurant night and day and badgering the friendly local restaurant reporter for months. 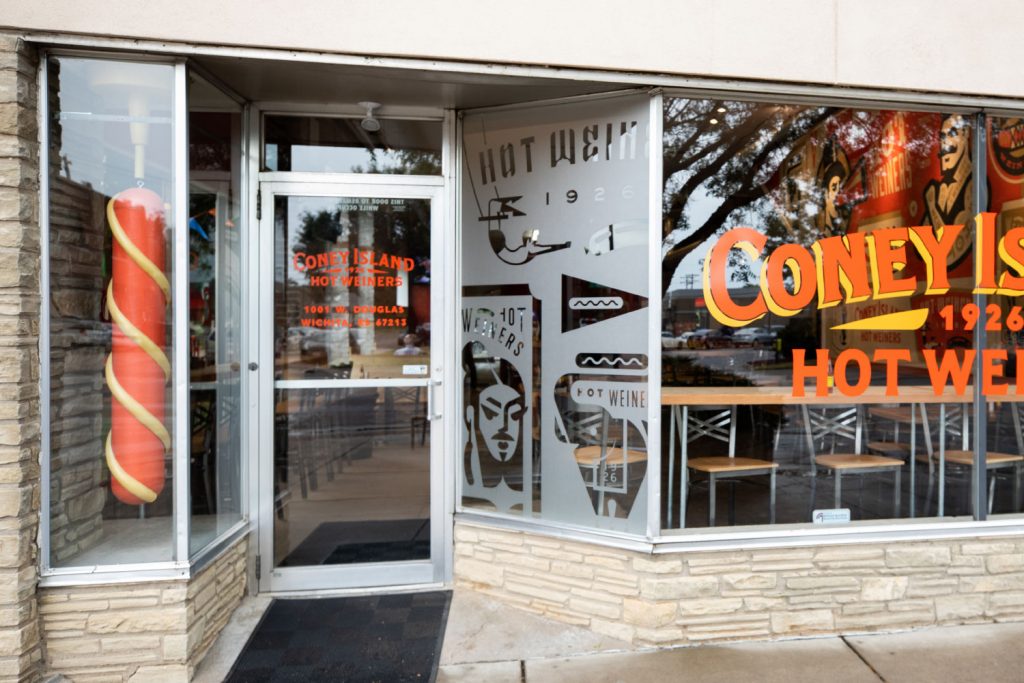 People have been peering in the windows, calling the restaurant night and day and badgering the friendly local restaurant reporter for months.

They demand to know: When will Coney Island Hot Weiners open in Delano?

There’s now an answer: Monday, July 8, as long as everything stays on track.

On Tuesday, Michael Frimel and Drayton Alldritt — who are among the partners who have licensed the Tulsa-based chain for 12 markets including Wichita — gave me a tour of the restaurant that’s almost done at 1001 W. Douglas.

It’s a colorful, unique place that will have a colorful, unique menu filled with coney dogs, Frito pies, tamales and “3-way chili,” a dish made by topping spaghetti with chili and beans. It’ll also have cinnamon rolls provided by Reverie Coffee Roasters/Founders Bakery and beer to wash it all down. You can see the full menu below.

A Nod to the Past

The decor also will be attention-grabbing, and that’s part of what took the partners longer to open the restaurant than they had planned. (Originally they were aiming for November 2018.)

But when it got down to it, the partners decided they wanted to spend a little more time fine-tuning the look of the restaurant, and they hired Bill Gardner of Gardner Design. Since they have a licensing agreement rather than a franchise, the partners are free to put their own spin on their Coney Islands restaurants, and they took advantage of it.

The west wall of the restaurant is covered with vintage boardwalk-style graphics created by Gardner Design’s Adam Anderson. It includes a cartoon strongman flexing his muscles and a carnival barker shouting through a megaphone.

Gardner has added his own quirky touches, too. There’s a selfie wall where customers can take photos and appear to be shouting the words “hot weiners” from a megaphone. In the front window, there’s a human-sized, mustard-drizzled rotating hot weiner.

And suspended from the ceiling is an upside down antique classroom chair/desk combo, a plate of coney dogs attached to the desk. It’s intended as a conversation piece that will allow people to learn about the restaurant’s history: When Greek immigrant Christ Economou first opened his stores in the 1910s, he didn’t want workers who stopped in for their lunch breaks to take up a big table, so he situated lots of these desks around the dining room. They’re part of the chain’s lore, and all of the partners’ future Coney Islands will have one hanging from the ceiling.

The partners have big plans for the chain and plan to open three more Coney Islands in the area. They hope to be able to announce where the next stores will be within the next three or four months.

In the meantime, they’re looking forward to finally getting Wichita into the Delano restaurant.

“The phone has been ringing off the wall,” Frimel said.

Coney Island Hot Weiners’ hours will be 10:30 a.m. to 9 p.m. Sundays through Thursdays and 10:30 a.m. to 10 p.m. Fridays and Saturdays. The owners are also working on a big outdoor patio just off the east side of the building. There’s seating inside for 64, and there will be booths, tables and a big table for large groups.

One other bit of trivia: Grammar police might notice that Coney Island spells weiners incorrectly, and there’s a reason. A sign posted on the wall explains that when Economou first tried to copyright “Coney Island Hot Weiners,” he was told it was too generic. To copyright his brand, he changed the spelling from wiener to weiner declaring: “I Before E Except Under Chili.”